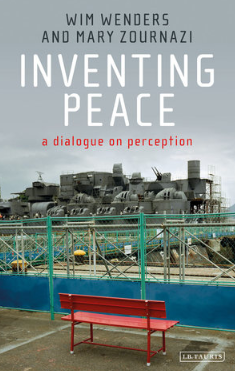 Wenders and Zournazi discussed their new book „Inventing Peace“ with Professor Jacqueline Rose at a sold-out venue at the ICA in London.

Taking the form of a written dialogue, INVENTING PEACE presents an exploration of human perception and concepts of peace. Through various cinematic, literary and artistic examples, this identifies the need to reinvent a visual and moral language for peace, providing an alternative to the inhumanity of war and violence.

Mary Zournazi is an Australian writer and philosopher. She teaches in the sociology program at the University of New South Wales, Sydney. She is the author of several books, including Hope – New Philosophies for Change (Routledge, 2003), and Keywords to War: Reviving Language in an Age of Terror (Scribe, 2007). Keywords to War was made into a radio documentary for ABC Radio National in Australia, and it was nominated for the Australian UN Media Peace Prize in 2008.

Jacqueline Rose is internationally known for her writing on feminism, psychoanalysis, literature and more recently on the politics and ideology of Israel-Palestine. She is a co-founder of Independent Jewish Voices in the UK and a Fellow of the British Academy, and teaches at Queen Mary University of London.

Find out more
Hear them speak on BBC