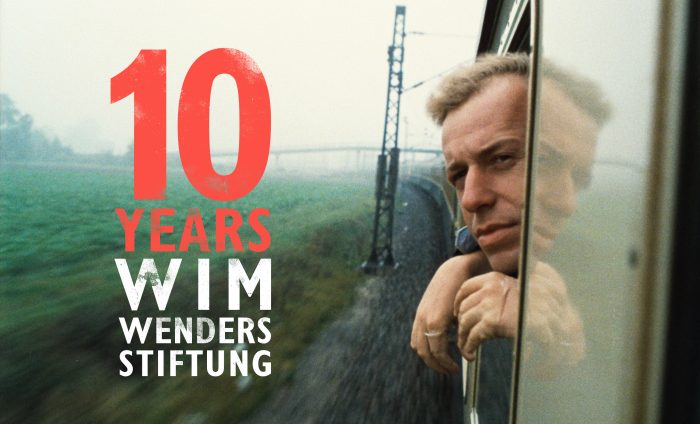 The Wim Wenders Foundation is celebrating its 10th anniversary! We look forward to the next ten years!

The Wim Wenders Foundation was established in Düsseldorf in 2012, on the initiative of Wim and Donata Wenders, with the dedicated support of the State of North Rhine-Westphalia, the City of Düsseldorf, the Cultural Foundation of the German Federal States as well as private donors and thanks to the networking and advice of Petra Müller, CEO of the Film- und Medienstiftung NRW.

THANKS TO OUR GUARDIAN ANGELS

The Wim Wenders Foundation would like to express heartfelt thanks to all donors, companions, supporters, institutions and staff who have made the WWS what it is today:

The State of North Rhine-Westphalia and The City of Düsseldorf for their generous financial support, with whose help fifty-two films could be bought back,

The Cultural Foundation of the German Federal States for a helpful loan,

Petra Müller who in her position as CEO of the Film- und Medienstiftung NRW brought all parties to the table and has been our Chairwoman of the Board of Trustees for the past ten years,

Marion Döring, Felix Krämer and Rusta Mizani who, as members of the Board, hold their protective hands over the Foundation together with Wim and Donata Wenders so as to guide it into a secure future,

Bernd Desinger, Dagmar Forelle, David von Galen, Thomas Hoegh, Miriam Koch, Petra Müller who, as members of the Board of Trustees, provide the Foundation with advice and support as well as

Dr. Marc Jan Eumann, Thilo Gabor, Hans W. Geißendörfer, Hans-Georg Lohe, Bernd Neuendorf and Annette Storsberg who have contributed to the Board of Trustees for many years,

Carolin von Roth who as founding Managing Director got the Foundation up and running,

Laura Schmidt who, as first Managing Director, made an enormous difference and kept the Foundation on course for eight years,

Claire Brunel and Hella Wenders, our two Managing Directors, who have accompanied the Foundation on its exciting journey since 2020,

Francesca Hecht and Christine Rennert,who, as Heads of Material and Catalogue Handling respectively, find the answer to (almost) every question with their know-how and meticulousness.