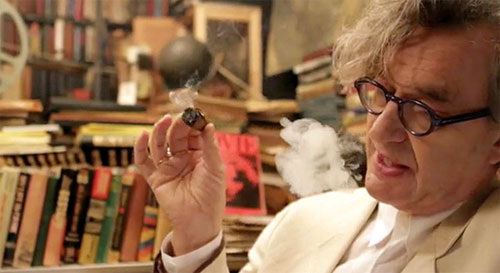 For the hundredth anniversary of her father’s birth, Samantha Fuller is offering us a look at his archive. The director found dozens of unreleased 16-mm film reels with footage from the Second World War, which became the point of departure for her film. A series of illustrious actors and directors meet in Fuller’s fascinating study and office: Jennifer Beals, William Friedkin, Monte Hellman, Tim Roth, Bill Duke, Wim Wenders, James Franco, and many others, read excerpts from Fuller’s autobiography, A Third Face: A Tale of Writing, Fighting, and Filmmaking. The film deftly combines stories with the found film footage and offers a sympathetic homage to one of the most interesting and controversial figures in American cinema.

Behind the Scenes – Shooting Wim Wenders for ‚A Fuller Life‘